This goal set so many weeks ago, managed to come to fruition within the set timeframe of 4 - 6 weeks and I am delighted, and also somewhat weary, all at the same time.

What a journey it has been!

Over the last 40 days it has been a time that has had its highs and also its lows. There have been times where it has taken some determined willpower to persevere and push on through, because discouragement had tried so awfully hard to step in occasionally and take hold of the steering wheel I was endeavouring to hold on to a set and specific course.

I have baked up a storm. I have cooked, compiled and frozen meals literally for hours around other commitments. I am sure I have frozen more muffins and meals than has ever been placed, in such a short space of time, in our freezer.

It has been a time of deliberately using less overhead lighting and being more conscious of how we are using various household utilities.

It has been a block of time, 40 days, which contained a great deal of active change and also reflection. It has perhaps been somewhat of an eye opening for those in my household that habitually wanted to do things only one way, to see that things CAN be done differently, and doing things differently CAN be wise and fruitful.

The $1,000 Plan has come to fruition, and the $1,000 savings now tucked away are a source of satisfaction, as they are no longer just funds that was once only a dreamy, wishful hope. 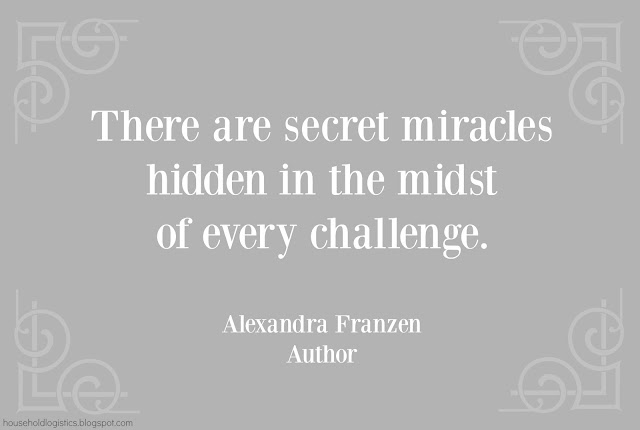 "There are secret miracles hidden in the midst of every challenge," is a quote I recently read online by author, Alexandra Franzen, and it is indeed very true.

There have been a number of positive, constructive results alongside the overall hoped for result of now having $1,000 in savings tucked away.

When you learn (and so much better master) that it doesn't matter what anyone else says; when you learn that no one else's opinion need be more important than your own; then and only then, you are just that much closer to actually obtaining what your mind is set on.

When you get up and keep going step by step, no matter what comes against you, it is highly likely you WILL end up making the most of everything that is at your disposal, and you will be so much closer today to your goal than you were the day before.

Challenges can be opportunities for failure and throwing in the towel, or they can be amazing, outstanding opportunities to hold faster, and never let go regardless, until the desired success is obtained.

We often need time to figure out what best to set in place. We need to figure out that, whatever it takes, we will persist no matter what.

We often need to figure out that one of the most essential breakthrough keys at our disposal is to be extra doggedly determined to see our goal come to be.

We need to figure out that by going the distance committedly, no matter what obstacles ever raise their ugly heads, that we will without a doubt eventually in time have our goal come to be.