For the past three days, Sebastian the cat has been very keen to keep a watchful eye on what occurs in and around our backyard compost bin. It appears with winter truly set in, mice have perhaps taken a liking to occupying and foraging around in our bin. 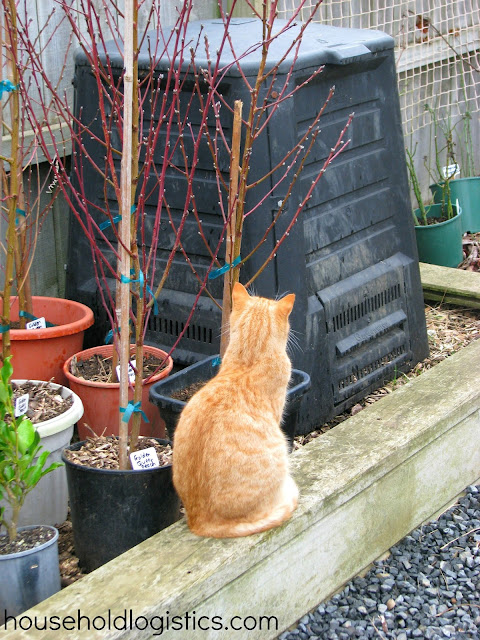 It has been quite entertaining watching Sebastian. He will dash into the house to eat food put out for him, then quickly dash out again, to take up his post beside the compost bin. He will often sit quietly watching and waiting to respond to any movement he notices in and around the bin. Other times, he can be spotted quietly stalking around the bin, sniffing and looking intently about it.

He has already caught one mouse. It would appear from his behaviour that he has seen and sniffed out the possibility of there being more. We have three ginger domestic short-haired cats, and they are all keen hunters. Sebastian is the youngest of the three cats, and he has obviously learnt a thing or two about hunting for unwanted rodents from his two older feline companions.

Sebastian's backyard vigilant antics of the past few days have been most entertaining. Let's hope his policing of the compost bin does help keep vermin away, and definitely from coming anywhere near the actual house for sure. Well done Sebastian! You are a good policing cat!
Labels: Backyard Antics