A kitchen can require a number of regular de-cluttering sessions, simply because it is more often than not a place of busy activity. A kitchen can regularly need a de-clutter to keep things functioning well, because of the volume of people traffic and activity that it is subjected to. The kitchen is definitely a busy place in my neck-of-the-woods. Is it like that also at your place? Having invested quite a bit of time previously endeavouring to sort, purge and organize the kitchen area, ours has needed some attention again.

To carry out an overhaul in the kitchen, some people may choose to remove everything from every cupboard and surface, and pile it all up on the kitchen table or a similar large surface, to tackle it in one mighty swoop. However for our household that approach is simply not going to be practical. Life very much carries on, regardless of what de-cluttering, re-organising is needed! What about you? Do you find removing everything all at once works best? Or do you focus on one area in a collection of steps also?

I have to admit, it just feels less overwhelming to take on any overhaul one step at a time. Nothing is worse than finding you have created even more of a mess than you began with! 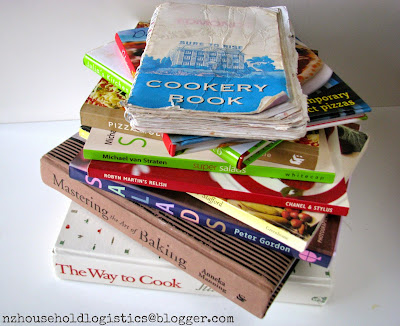 The kitchen cupboard which I tackled first, was that which contains our recipe books. Batteries, candles, matches and torches are stored there also. It is one of those cupboards that requires everything contained within it to be readily accessible, yet the actual contents are not used that regularly. I decided to embrace the fact that if there were things that were really not being regularly used, it was time to consider doing some serious purging. So eventually, a small pile of recipe books to be re-homed began to pile up on the kitchen table.

Recipe books really are resources, within the home, that can easily become actual clutter. We can live in the hope of one day trying that delicious looking recipe, and instead end up having shelf upon shelf of recipe books containing recipes that will never be baked or cooked. It was time to be very realistic and accept I was not going to make good use of them all and so they were only now, in all fairness and reality, serving as clutter. Does this sound familiar to you also? It can be so easy to be swayed by mouth-watering pictures that convince us to hold on to what simply proves to be just another dust collector and another space-filling item.

Now with so many recipes being able to be sourced online also, why keep so many actual recipe books which are all taking up precious shelf space? It was time to definitely let go of some of the recipe books, and I am pleased with the overall result. Having wiped out all the surfaces, everything smelt fresher and cleaner, there was even a sense of space, and it all looked so much better.

When it came to thinking about how to store things like candles and batteries, it really didn't take much extra thought to determine how I could tackle storing those things better in this particular cupboard also. I really like the Sistema brand of storage containers, so Sistema containers were used again here in this particular cupboard! Sistema Containers seem to be secure containers. Once the side locking pieces are securely clicked into place, you pretty much know for sure the contents are going to be kept airtight and well contained. That of course, is very handy when it comes to things like matches and even batteries. Keeping those items contained up high, and as secure as practically possible, allows you to have greater peace of mind.

Once again, I designed some labels using Picmonkey for the Sistema storage containers, and the overall look of the cupboard is now visually appealing and it is definitely sorted out much better.

It was a good start to my focus on doing a re-shuffle and clean up in the kitchen. So here are a couple of 'Before' and 'After' photographs side by side, because it is always fun to see them:

Doesn't it look so much better! It is great to now only have recipe books that we refer to. Plus, now that we have sorted and got specific containers for things like batteries and torches, it is going to be much easier to locate them any time they are required. Everything having a place and everything in it's place....Love it.

Leave a comment and share what has worked particularly well for you when organizing your recipes, as well as batteries, torches, etc.
Labels: Clutter Busters, Kitchen, Organization, Project:Kitchen, Storage